Have a question not covered in this guide?  Check our FAQs where you can search for answers and submit new questions.

Want to talk with a reference librarian?  Send us a chat. 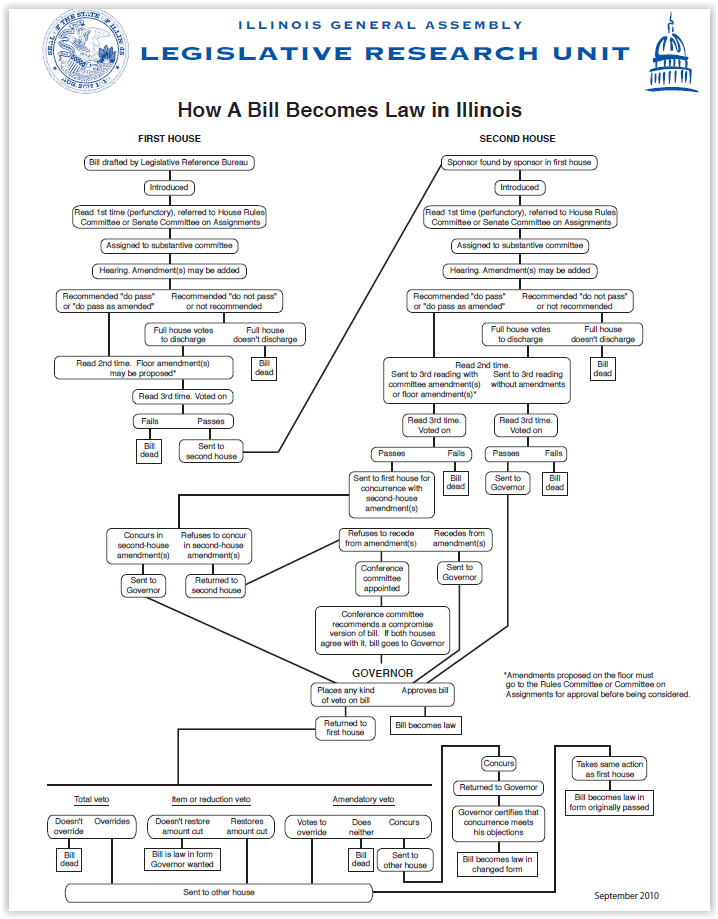 The legislative process begins with a member of the Senate or the House of Representatives introducing a bill. The bill is assigned a unique identifying number, which it retains through both sessions of  the current General Assembly. Each session is one year, and each General Assembly. A House of Representatives bill is designated "H.B. ___"; a Senate bill is identified as "S.B. ___" (in each case, often without periods). Frequently, before the final version of a bill is reported to the floor of the chamber, a committee will consider alternative versions. If a bill is not enacted into law during the General Assembly in which it is introduced, it must be reintroduced in a subsequent General Assembly, where it will be assigned a new bill number, and will start through the process again. Comparing the enacted language with the language of earlier versions of the bill or of amendments which were not accepted, or with other, unadopted, bills on the same subject can sometimes be used to infer the intent of the final version.

The bill is then assigned to the appropriate committee(s) of the house--the House or the Senate--in which it was introduced. Significant bills are generally supported by hearings held by the committee (or one of its subcommittees) to determine the views of experts, lobbyists, agency officials, or other interested parties. The purpose of a hearing is to determine the need for new legislation or to solicit relevant information. A hearing's usefulness (in statutory construction) is limited by the large amount of testimony pro and con and the difficulty of establishing a connection between specific remarks made during the hearing and their effect on the final language of the bill.

Committee work might include markup sessions, wherein the committee makes changes to the bill in the form of amendments.  While most bills die in committee (that is, never get reported out to the whole House or Senate), if the bill is acted upon favorably by the committee, a committee report may be issued.

If a bill reported out by the committee, it is sent to the floor for debate, possible amendment, and a vote. The debate transcripts are available online at the Illinois General Assembly's website.  With the lack of substantive committee reports in Illinois, floor debate is usually the most robust piece of legislative history.  However, the transcription of floor debate was not required until the framing of the 1970 Constitution, so earlier debate is unavailable except for some rare instances.

If the bill passes a chamber, it is sent to the other chamber, where it proceeds through a similar path (committee consideration followed by a debate and vote). If it passes both chambers, it goes to the governor for signing and gets a Public Act number.

If the second chamber amends the bill and the first chamber does not accept (concur in) the amendment, a conference committee made up of members of both chambers is convened to work out a compromise.  If a compromise is reached and passes both houses, it is sent to the governor for signing or veto.

Once the legislation reaches the governor's desk, the governor may sign it into law or issue a veto.  The type of veto and any accompanying veto message becomes part of the legislative history.